A Tribute to the fallen Maltese-Australian ANZACs killed in action

BLOG   On Friday 25 April, we commemorate the 99th anniversary of ANZAC Day. It is a fitting occasion to pay a special tribute to seven brave, young Maltese soldiers, who joined the ranks of the Australia and New Zealand Army Corps, better known as ANZAC, and gave up their life on the battlefields of Gallipoli and the Western Front in Europe during the First World War. Six were immigrants from Malta and one was a second-generation Australian Maltese from Melbourne. Their remains are buried in foreign soil at Gallipoli in Turkey and in cemeteries in France and Belgium.
On ANZAC Day we remember all Australians, New Zealanders and those from other countries who served and died in all wars, conflicts, and peacekeeping operations. Courage, mateship, and sacrifice are the human qualities that embody the spirit of ANZAC, which continues to have meaning and remains relevant to the Australian national identity. Commemoration ceremonies are held in towns and cities all over Australia to acknowledge the service of our veterans. In Melbourne, the Dawn Service and the ANZAC Day Ceremony and March are held at the Shrine of Remembrance.
In the First World War the soldiers not only battled the enemy on the battlefield, but when in the trenches fortified with sandbags and barbed wire, which provided some protection, these men fought more deadly foes. Far from being comfortable, they had to fight disease, lice, rats, inadequate drainage and infections due to the infestation of rats and closeness of the bodies and not being able to wash for weeks.
The seven Maltese young men who paid the ultimate price with their lives on the battlefield ranged in age between 24 and 31 years. Four were killed in action in France, two in Belgium and one in Gallipoli, Turkey.
The following table lists the seven heroic men in the order in which they had fallen:

Another 30 Maltese Australians were engaged in combat in Gallipoli and the Western Front but were fortunate to survive and return to Australia as ANZAC survivors. A smaller number also served with the Australian Army as support personnel, such as, motor drivers and labourers.

Researched and written by Carmen Baxter & Mark Caruana
BONAVIA. Charles Emanuel Bonavia was born in Sliema and arrived in Australia as a bachelor aged 24 years. Son of Emanuel and Giorgina Bonavia of 331 Strada St Paolo, Valletta, Charles was a draughtsman by profession and enlisted with the Australian and New Zealand Army Corps in the Australian Imperial Force [Reg. No. 157] on 9 September 1914 as a Private (aged 27).

A tall man with a dark complexion, Bonavia was allocated to the 11th Battalion of ‘B’ Company. Together with his unit, he left for overseas duty from Fremantle, Western Australia, on the Transport ship A11 Ascanius on 2 November 1914, and saw service in Egypt and Gallipoli. A few months later, his father received a letter from the Army advising him that his son was missing in action somewhere in Gallipoli, Turkey. It was a great shock for the Bonavia family, all hoping and praying their son would be found alive and well. As was the procedure when a soldier is missing in action, a Court of Inquiry was held in this case at Fletre, France, which concluded that it would be reasonable to assume that he was dead. Eventually came the official verdict that Private Charles Emanuel Bonavia had been killed in action. As he was never found, there is no known grave for him. It was a traumatic experience for his family, when they received the second letter confirming the bad news.
Bonavia was one of the first soldiers to be killed in action on Anzac Day, 25 April 1915 and posthumously awarded the 1914-15 Star, the British War Medal and the Victory Medal.
BROWN. Francis Alfred Brown was born on 4 February 1886 in Valletta and later lived at 213 Prince of Wales Road, Sliema. He applied for a passport to emigrate to Australia on 24 September 1913 and three years later he answered the call and enlisted with the Australian and New Zealand Army Corps [Reg. No. 31803]. 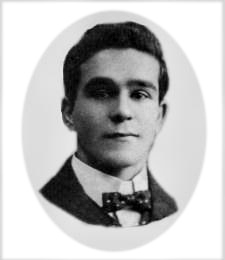 Francis was the son of Joseph and Angiolina Brown of 12 McDonald Street, Leichhardt NSW. He enlisted on 16 October 1916 with the rank of Gunner, at the age of 30 and he was assigned to Medium Trench Mortar Battery, 5th Reinforcement, a very demanding mission. Together with his unit, he embarked from Sydney bound for Europe duty on board troop ship A67 Orsova on the 2 December 1916.
Nine months later he was killed in action on 5 September 1917 in Belgium and laid to rest at Ypres Reservoir Cemetery, Belgium in Plot I, Row D, Grave No.71. After his death, Gunner Brown was awarded the British War Medal and the Victory Medal.
BELLIA. Francis Bellia was born on 21 September 1899 in Valletta and resided at 36 Sda Miratore, Floriana. He married Sarah Harriett and after applying for a passport to come to Australia on 17 October 1909, settled with his wife at Meroo, Tavistock Road, Flemington NSW.
A man short in stature and weighing 116 lbs, he enlisted as a Private on 23 January 1917, at 27 years of age, giving his occupation as a driver [Reg No 7209]. After his basic training, and assignment to the 1st Battalion, 24th Reinforcement, he left Australia with his fellow trainees, embarking from Sydney per RMS Osterley on 10 February 1917.
Sadly, Bellia was killed in action on the 17 April 1918 at the young age of 28 years. He is buried about 1,400 yards SSW of Meteren, at the Meteren Military Cemetery, France, and lies in Plot IV, Row K, Grave No.864. After his death, Bellia was decorated with the British War Medal and the Victory Medal.
RIZZO. Although the only one of the seven heroes not born in Malta, Thomas Rizzo was born of a Maltese father, Antonio, and an Australian mother, Johanna, who lived in Melbourne Victoria. He attended St Francis Christian Brothers School in Melbourne, and at the age of 26 decided to enlist in the Australian Army for overseas service. This tall, young man with blue eyes and black hair filled out his Enlistment papers on

21 February 1916 in Melbourne and was assigned to the 22nd Battalion Australian Infantry – 13-18 Reinforcement with the rank of Private [Reg. No. 5084]. After months of training, his unit boarded the HMAT Ayrshire on 3 July 1916 and headed for foreign shores.
Sadly, on 19 May 1918, he was pronounced killed in action at age 28, and buried in France at the Dive Copse British Cemetery Sailly-le-Sec, a small village about 14 kilometres south-south-west of Albert. In this cemetery are 494 UK, 47 Australian, 18 South African and 30 unidentified burials of the First World War.
As Private Rizzo did not enlist until after 1 January 1916 he was not eligible for the 1914-1916 Star Medal, but he was awarded the British War Medal and the Victory Medal.
BECK. Waldemar Beck was born in Sliema at 91 Strada Rudolfo. He was the son of Lawrence Edward and Carolina Beck. Whilst his occupation was that of a motor driver, Beck had attended the Royal University of Malta, earning the degree of Bachelor of Economics and Land Surveying. With this qualification he did a one-year apprenticeship with S. Sacco in Malta before emigrating to Australia. As a single man, 5 ft 7 ins tall with a fresh complexion, blue eyes and dark brown hair, he enlisted on 9 October 1916 from Perth when he was just 27 years old [Reg. No. 6969]. He was assigned to the 16th Battalion, 23rd Reinforcement, which embarked from Fremantle, Western Australia on the HMAT A35 Berrima on 23 December 1916.
Some months later, the Battalion found itself in France. He was plagued with many health problems and after being admitted for treatment and rejoining his unit during his tour of duty, he was wounded in action in France near Hamel (during the Battle of Hamel) on 6 July 1918 and consequently died of gunshot wounds aged 29.
Private Beck was later buried in the Bois Guillaume Communal Cemetery Extension (Row D, Grave No. 6B), France, and awarded the British War Medal and Victory Medal for his service with the ANZACS.
BARTOLO. Francesco Bartolo was born on 21 November 1893, son of Vincenzo and Carmela Bartolo of Mellieħa. A labourer, he applied for a passport to emigrate to Australia on 27 October 1913 and went to Tasmania to work in the mines where a number of Maltese were employed.
Barely out of his teenage years, this slightly-built young man of typically Maltese features, enlisted to fight with the Australian and New Zealand Army Corps from Queenstown, Tasmania, on the 26 February 1915 [Reg. No.823]. In his enlistment form, Francesco stated that he served four years in the British Army in Malta prior to migrating. Although unable to write, Francesco still wanted to be part of the Battalion of Anzacs.
He was assigned to 26th Battalion Australian Infantry, ‘C’ Company, sailing on Troopship HMAT A60 Aeneas for service overseas on 29 June 1915. During this tour of duty he was wounded twice but rejoined his Battalion before falling sick and admitted to hospital on 2 March 1918 and again fought on with his Company from May 1918.
Prior to embarkation as a single man, he nominated his father Vincenzo in Malta, as his next-of-kin in his will. This was later changed to his wife Madeline Sims of Wood Green, London whom he married in 1917 after being wounded in action for the first time and was sent to England for hospital treatment.
Sadly, on 9 August 1918 during the fighting in the second Battle of the Somme, France, he was killed in action and buried one month later by his fellow soldiers, in the Australian Section, 3rd Echelon, SHQ BEF, Plot 1, Row A, Grave 16 France, 526, Heath Cemetery, just 2500 yards north of Harbonnieres. He was posthumously awarded the 1914-15 Star Medal, the British War Medal and the Victory Medal.
CAMILLERI. Andrew Camilleri was a stone cutter by trade and migrated to Australia in 1913 at the age of 19 years. He was the son of Caterina Camilleri of Mqabba, Malta.
Before migrating he served in the KOMR for a few months. Being used to military life he wanted to enlist in the Australian Army, so when he was 23 he filled in his enlistment papers at Victoria Barracks in Sydney on 24 January 1917 [Reg. No. 7212]. His papers show that he was 5ft 3¾ ins tall and weighed 150 lbs with a dark complexion, brown eyes and dark brown hair. 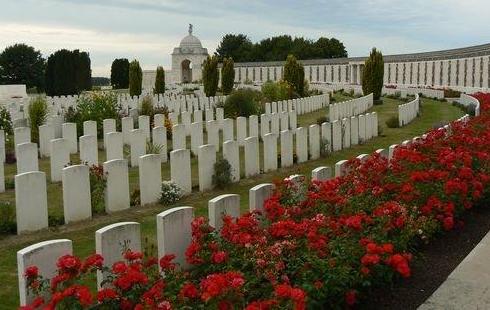 Tyne Cot Cemetery in Belgium where Private Camilleri is buried.

After the basic three months training he joined his fellow trainees who were assigned to the 35th Battalion Infantry and boarded from Sydney per Troop carrier RMS Osterley and later transferred to 62nd Battalion. His assignment in the battle fields was cut short as he was pronounced killed in action aged 26. Previously he had been reported as missing in action.
Private Andrew Camilleri’s place of burial is Tyne Cot Cemetery, Passchendaele, Belgium. He was awarded the British War Medal and the Victory Medal after his death.

Carmen Baxter née Bonello, of Sydney NSW, the daughter of Nicholas Bonello who is spearheading the building of an ANZAC monument in Malta, and Mark Caruana, also of Sydney NSW, a well-respected migration researcher and family historian, researched and compiled the above information about the seven Maltese ANZACs sourced online from War Memorial records held in Canberra.

Their aim in conducting the research is to increase awareness about those Maltese in Australia, who arrived as migrants, answered the call to take up arms and join the Australian Imperial Forces and ultimately sacrificed their young lives in the conflicts at Gallipoli and on the Western Front. The authors trust it will highlight one of the strongest bonds that links Australia, NZ and Malta in an indelible way.

Videos of ANZACS at war

Timeline of the war at Gallipoli