The 12th legislature since Independence opened today in Valletta, with the government promising in the President’s ‘Speech from the Throne’ that it will usher in a new chapter in Malta’s political history.

The ceremony started with Mass of the Holy Spirit at St John’s Co-Cathedral. The MPs then walked to the Palace, applauded by people who stood behind police barriers in Republic Street.

Mass of the Holy Spirit

The ceremony started with a Mass of the Holy Spirit, led by Archbishop Mgr Paul Cremona. Those present included the outgoing Speaker of the House of Representatives, Dr Michael Frendo. The two parties were led by their respective leaders, Prime Minister Dr Joseph Muscat and Opposition Leader Dr Lawrence Gonzi.

In his homily Mgr Cremona said that Parliament should serve for the MPs to lead and administer the country to the best of their abilities, knowing that as human beings they can commit mistakes. Who leads needs a bigger dose of love towards others than those who are at the receiving end of their leadership, Mgr Cremona said.

Forgiveness is a great value, he added, and without it people will be hindered from fulfilling their functions to the best of their abilities. He drew a comparison between the washing of the feet on Maundy Thursday, by which one is of service to others. Politicians must also respect and be of service to the people they represent.

At the start of the inaugural parliamentary session, Dr Anġlu Farrugia was sworn in as Speaker of the House of Representatives following a motion moved in the new Parliament by Prime Minister Joseph Muscat. Opposition leader Lawrence Gonzi strongly objected to the motion and the appointment was made after a division, with 39 votes in favour and 30 against.

In his speech, Dr Gonzi said the Opposition objected to the appointment, saying this was a mistaken decision about which the Opposition had not been consulted and something which sowed division.

Dr Gonzi said this country needed unity, not division in such important times. He said the Opposition was reiterating that it would be constructive and it would cooperate with the government for job creation, sound finances and better quality of life for the people.

The Opposition’s actions in parliament would be based on what it believed to be in the interests of the country. He said the Opposition had collaborated with the government over the past days such as in changes of protocol on Freedom Day and the parliamentary programme. It had agreed to nominate a deputy speaker after the then opposition refused in the past three years.

But the government was not reciprocating. It appeared to want to tease and even challenge the opposition, as was the case with the appointment of the coordinator of the Constitutional Convention, a pity since the Opposition had had a lot to offer in this sector.

The government had also not consulted the Opposition in the appointment of the Speaker. This was in sharp contrast to what happened in the past. The former government had offered the Speaker’s chair to the Labour opposition. He as prime minister had also always sought consensus on all constitutional appointments.

The present government consulted the social partners on the chairmanship of the MCESD, the majority objected, and it steam rolled over them. With regard to parliament, the prime minister did not even have the courtesy of consulting him.

Such an appointment should not have been used by the prime minister to make friends with the person whom he had ‘politically assassinated’ – to use Dr Farrugia’s own words.

Dr Gonzi said the Opposition would continue to respect the Chair because Dr Farrugia was not to blame for what was happening.

Replying, Prime Minister Joseph Muscat said the message sent by the people on March 9 had not been heard by the Opposition. He had expected disagreement, but he had expected a more positive start to the legislature. The Opposition had spoken like the end of the world was near.

The government remained ready to work with the Opposition. Labour was elected on the slogan ‘Malta Tagħna Lkoll’ (‘Malta belongs to all of us’) and he hoped the Opposition would let its members join government institutions so that they could work in the national interests.

Following the election of the speaker, the Prime Minister moved the appointment of Nationalist MP Mr Censu Galea as Deputy Speaker. The motion was seconded by the Leader of the Opposition.

The new speaker then presided over the swearing in of the Members of Parliament. 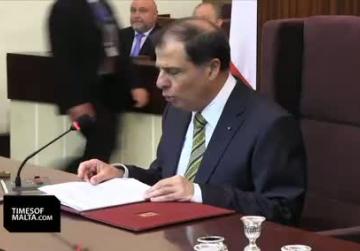 The government’s programme was outlined in a 24-page speech read by President Dr George Abela. As is the norm, the address was mostly a reproduction of the governing party’s electoral programme.

In the speech, the government said the time of pique, partisan politics and arrogance in the government and all levels of the administration must become a thing of the past. It also promised to keep in constant touch with the ordinary people and to work in serenity for the country’s progress.

The government said its immediate priority was to move the Budget for this year. It had also started working intensively on its energy plan with a view to converting power generation at the power station to gas and reducing the tariffs as promised. The government aid that with regard to the interconnector, the situation was not as described by the previous government and costs would rise by €26m due to lack of planning. It said it would be positive and work for the project to be completed on time, however a review of costs and timelines was currently under way.

Malta had also fallen back on its alternative energy targets because they were based on a wind farms project which had also fallen back considerably and might not even be viable, the government added. It would therefore invite the private sector to partner it in a aggressive investment in solar energy, while studies into wind energy would continue.

The government was also committed to improving the level of service at ARMS Ltd.

The President said the government wanted to see the highest standards of public administration and it wanted to see new public confidence in politics and politicians. Ministerial pay would be reviewed by independent persons and any change would come into force in the next legislature

The enactment of a Whi
stleblower Act and a law to oversee party funding would be priorities.

In education, the focus would be on encouraging more young people to continue studying. Teachers would be able to focus more on teaching. There would be increased focus on the fight against illiteracy. The Junior College would be modernised and the building of the Mcast campus would continue. The system of national vocational qualifications would be strengthened. Stipends would be raised according to the cost of living index.

In job creation, the government would encourage women to return to employment. It would provide training for workers who were seeking more skills and it would give incentives and training for those who depended on social services. An Active Market Policy Counselling and Action Committee would be set up. Income tax on part-time work would be reduced and the government would strengthen flexitime, job sharing, compressed week, reduced hours and teleworking schemes.

There would be measures against precarious work and companies which did not respect the conditions of work of their employees would not be allowed to tender for government contracts.

With regard to government finance, the government would aim for fiscal stability and consolidation, with better control over the deficit.

The government reiterated its promise to provide new care services for persons with disability once their parents passed away.

It also reiterated its promise to review the administration of the law courts to ensure there was a better service and more checks and balances throughout the system.

With regard to civil liberties, the government said a bill to allow marriage for people who changed their gender would be moved shortly. The government would also move legislation on cohabitation and civil unions between people of the same gender.

Dr Abela said the government would reform MEPA, for a better service and in order to separate its planning and environment functions by the end of next year.

Foreign Policy, he said, would not be focused only on the EU, and the government would also seek closer relations with countries such as China, the US, Libya, Australia, Russia, Turkey, the Gulf and Middle East countries, India and Brazil.

Dr Abela said that the government would also modernise the national institutions including the way Parliament functioned. At the heart of this process would be a new, more democratic Constitution.

Concluding his speech, Dr Abela said that this was a government that was committed to writing a new page in Malta’s political history. It would extend a hand of friendship to everyone and it would remain committed to the promises it made before the election.