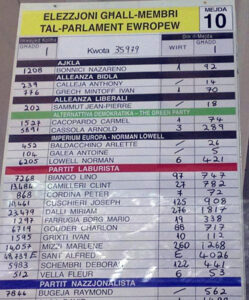 NEWS   The Labour government registered a landslide victory in the election for the European Parliament conducted in Malta last Saturday. In the first count the Labour Party received 134,462 votes (53.3%) or 13% more votes than the opposition Nationalist Party who received 100,785 votes (or 40.1%) of the votes cast. The remaining votes, about 16,000 or 7%, went to the small parties, with 7,418 votes going to Alternattiva Demokratika and 6,761 to Imperium Europa.
Ex-Prime Minister Dr Alfred Sant was elected with 48,739 first count votes, with PN MEP candidate Dr Roberta Metsola close to the quota with 32,360 votes.
Dr Sant had led the Labour Party as its leader in a crusade against European Union membership, offering the option of partnership which had been then resoundly rejected by the electorate. Now, 10 years later and after being replaced by Dr Joseph Muscat as Labour leader, Dr Sant obtained the largest number of preferences and was the first and only candidate to be elected in the first count. The election quota stands at 35,979 votes. As such, the former Prime Minister exceeded this number by 12,760 votes.
MEP Dr Roberta Metsola is the Nationalist Party’s leading candidate, but while her re-election is practically assured, she was not elected on the first count.
While PN leader Simon Busuttil would be disappointed with his party’s results, his record 68,782 first-count votes that he had received in the 2009 European Parliament election still stands by a wide margin.
Front-runners
The PL camp are expected to grab a minimum of two out of the five seats still up for grabs in the MEP elections. MEP hopeful Miriam Dalli has a strong lead over the rest of the pack with 23,479 votes and is expected to take the second PL seat. PL MEP hopefuls Marlene Mizzi (14,057 votes), Clint Camilleri (13,484 votes) and Joseph Cuschieri (10,461 votes) battling it out for the 3rd and possibly 4th MEP seat.
In the PN camp, MEP hopeful Roberta Metsola is expected to be elected later today, currently standing with 32,360 votes. Candidate David Casa has a strong lead for the 2nd PN seat, with 19,582 votes. The 6th and final seat is still contested between the PL and PN and could go either way. PN MEP candidates Francis Zammit Dimech (8,660 votes), Therese Comodini Cachia (7,859 votes) and Raymond Bugeja (7,846 votes) are all possible contenders.
The winners of the final seats will come down to votes inherited.
Prime Minister’s reaction

Last Saturday’s victory was a convincing one which the Labour Party welcomes with humility and satisfaction, Prime Minister Dr Joseph Muscat told the press on Sunday afternoon.
Speaking at a press conference at the Auberge de Castille soon after the first preliminary results were out, Dr Muscat said the electorate had shunned the Opposition’s negative politics and embraced the PL’s performance.
The Prime Minister said he was satisfied for three main reasons. Firstly, the PL has confirmed that is it the biggest political force in Malta, just one year after the general election. “We have also become the first Maltese party in government to obtain an abolute majority in EP elections.” The Prime Minister noted that most European governments would be losing the election. Despite this fact, the Maltese government has not only won the election, but has also won it with a convincing majority. “We have won the credibility test.”
The second reason is the fact that the percentages obtained by the two major political parties are similar to those of last year’s general election. “The Labour movement is continuing down the road it set off on a year ago. Labour has obtained three majorities in three successive elections in 2009, 2013 and 2014, and this shows that there has been a change in the political landscape, something that the PN has not yet understood.”
Dr Muscat said that ‘Malta Taghna Lkoll’ is still alive and healthy.
Thirdly, the electorate has given a clear message that it does not want negative politics. “The Opposition Leader did not have a message, only low-level attacks and incitement.”
The Prime Minister said the current PN leadership has kept the PN in the same levels it had gone down to during the last Gonzi administration. This should have been an easy election for the Nationalist Party. The PN has made no inroads since last year, the PM said.
Dr Muscat said the government will listen to those who did not vote and those who voted for the smaller parties. “We will try to convince them to come on board. We will keep working to better this country and we will not let our success go to our head. This government has already brought around big changes, changes that have improved people’s lives. And the electorate has taken note of this.”
When asked if he would take note of the PN’s criticism on governance, Dr Muscat said he would take note and change what needs to be changed, even if he does not necessarily agree with the criticism that is being levelled against him.
On why the PN has not gained any ground, Dr Muscat said that the problem is not with the PN leadership but with its attitude.
Prime Minister Joseph Muscat told supporters who gathered during a rally following the PL’s victory that the government would remain with its feet on the ground and as from this evening “we will give our 200 per cent”.
Flanked by PL deputy leaders Toni Abela and Louis Grech, Dr Muscat said that I can assure you all that we will remain close to you and we will continue to work hard. “If before we have our 100 per cent, we will now give our 200 per cent, as from this evening,” he said.
Opposition Leader’s reaction 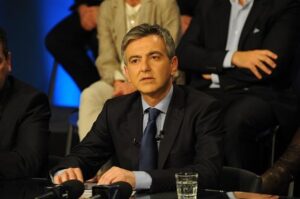 On Sunday Opposition leader Dr Simon Busuttil accepted today’s defeat in the European elections but vowed to keep on working to once again make the PN the natural choice for voters.
Speaking at a press conference, Dr Busuttil said that the third EP seat still hangs in the balance. Asked whether he will resign in the face of this defeat, Dr Busuttil said that he will wait for the result of the third seat to come in.
Dr Busuttil reminded that the departure point for the EP elections was a massive defeat for the Party in last year’s general election. He said that the PN accepts its latest defeat with humility. Some inroads were made he said, but there is still much more work to be done. He said that the PN will double its efforts and will not give up, despite not convincing enough people to vote for the Party this time round.