Maltese in Melbourne give new Consul General a warm welcome 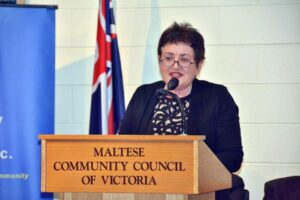 The new Consul General of Malta for the State of Victoria, Ms Joanna Pisani, received a warm welcome at a well-attended reception, which was hosted by the Maltese Community Council of Victoria at the Maltese Centre in Parkville on Thursday 21 September 2017. The reception was also held to celebrate the 53rd Anniversary of Malta’s Independence.
Among the distinguished guests at the reception were MCCV President Mr Victor Borg; Mr Eddie Micallef, Chairman of the Ethnic Communities Council of Victoria; Dr Edwin Borg-Manché, Honorary Consul of Malta for Victoria and MCCV Vice President; Mr Mario Sammut OAM, Honorary Vice Consul of Malta for the Latrobe Valley; Fr Edwin Agius and Fr Lonnie Borg of the Missionary Society of St Paul; and Sr Doris Falzon OP, Administrator of Rosary Home Residential Aged Care facility in Keilor Downs.
In his address MCCV President welcomed Ms Joanna Pisani as the new Consul General of the Republic of Malta for Victoria. He spoke briefly about the long gestation period of Malta’s independence, touching upon the history of foreign dominations over the centuries, culminating in the granting of independence to Malta by the British on 21 September 1964.
The Maltese people had to go through a lot of suffering over the years and, particularly during the Second World War, before Malta was able to acquire its independence. Having become a republic in 1974, Malta joined the European Union in 2004.
Mr Borg then introduced Ms Joanna Pisani (pictured above) to the gathering. He said that Ms Pisani is a career diplomat, with great experience in this area. She joined the Malta civil service in 1976, After 12 years working in the Ministry of Agriculture, she moved to the Ministry of Foreign Affairs, where she headed the Scholarship Section for 15 years, during which time she was awarded a Quality Service Charter.
In 2003 Ms Pisani was appointed Consul General of Malta in Sydney until 2008. On her return to Malta on 1 March 2008, she was appointed Deputy Chief of Protocol within the Protocol and Consular Services Directorate of the Ministry of Foreign Affairs.  On 17 September 2009 she was appointed Acting Director Protocol and Consular Services and on 24 November 2011 she was appointed Director, Protocol and Consular Services.
On 1 July 2015 she was appointed Chargé d’Affaires at the Embassy of Malta in Dublin, Ireland. On 14 August she took up the post of Consul General of Malta in Melbourne with jurisdiction over the State of Victoria.
Mr Borg welcomed Ms Pisani to Melbourne and said that he was sure that she would enjoy her stay here among the Maltese community. He said that he hoped that the MCCV would continue to maintain the very close relationship with the consular office.
In her reply address, Ms Pisani thanked everyone for their warm welcome. She said that she had previously been Consul General in Sydney but, after nine years, she never dreamt that she would return to Australia to serve as Consul General in Melbourne.
In relation to Malta’s independence day, Ms Pisani said that Malta’s location in the heart of the Mediterranean has historically given it strategic importance as a naval base which led to a succession of powers, including the Phoenicians, Romans, Moors, Normans, the Order of St John, the French and finally the British, to rule the Maltese archipelago.
Ms Pisani said that when Malta gained its independence, it established bilateral relations with Australia. Malta and Australia have outstanding relations, especially by mutual interests, such as, the Commonwealth and the Maltese diaspora. “I have every confidence that this excellent relationship with Australia will continue in the future,” she said. Evidence of this excellent relationship is the number of official visits by dignitaries between the two countries. The most recent visit was that of the Maltese President Her Excellency Marie-Louise Coleiro Preca who came to Australia in July last year. The President takes great interest in the second and subsequent generations of Maltese descent.
Ms Pisani said that Malta attaches great importance to the preservation of Maltese heritage among the Maltese diaspora in Australia. The Ministry of Foreign Affairs helped to facilitate the resolution of consular problems encountered by members of the diaspora by means of the Consul-on-the-Move project which has been very successful.
Ms Pisani referred to another initiative relating to the teaching of the Maltese language over a digital platform. It is hoped that this project will come to fruition in the not too distant future.
She briefly spoke about the reduction in Maltese language programs on SBS Radio from nine to two per week due to a substantial decrease in the Maltese population in Australia according to the census. She stressed the importance of declaring the use of the Maltese language when completing the census.
In closing, Ms Pisani thanked those present for their welcome and she said that she looks forward to working closely together with the Maltese community during her stay on Melbourne.
Following her address, a recorded video message from the Minister of Foreign Affairs and Trade Promotion, the Hon. Carmelo Abela, about Malta and its contributions on the international stage was shown to the audience.
Both Mr Borg and Ms Pisani also addressed in Maltese.
Fr Edwin Agius also addressed the gathering. He said that, throughout its history, Malta and the Maltese have always has a strong relationship with God through the Catholic faith introduced to Malta by St Paul. This faith is something that the Maltese brought with them to Australia and contributed to the local culture and to the church in Australia.