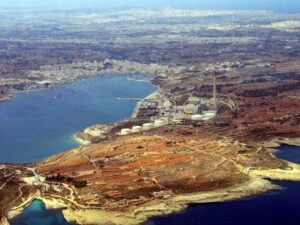 Marsaxlokk Bay: an aerial view showing the proximity of the Delimara power station in the centre of the photo and Marsaxlokk in the background [photo: maltastar.com]

NEWS   One of the hottest political issues currently being debated in Malta relates to the risk to public safety for residents of southern Malta, particularly of Marsaxlokk and Birzebbugia, that is posed by the government’s controversial plan to berth a floating liquefied gas storage unit to feed the Delimara power station so close to shore in Marsaxlokk Bay.
Last Tuesday’s sitting of the Maltese House of Representatives was devoted to a general discussion on the environmental permit for the power station at Delimara to be fuelled by liquefied natural gas (LNG), a day after Speaker Dr Anġlu Farrugia had ruled that the Environment and Planning Committee of the House was not empowered to discuss the issue.
Opposition MPs within the committee had requested a discussion on the environmental impact assessment of the new gas-powered plant which is set to be built by the ElectroGas Malta consortium, and their request was supported by committee chairman Marlene Farrugia.
But Ms Farrugia stressed that she could only act upon a written ruling by the Speaker, who ruled that the committee should not and could not discuss the issue once the House Business Committee decided to hold discussion at a plenary stage.
In her intervention during the sitting, Ms Farrugia explained that she believed that the issue should have been discussed in committee as committee discussions would allow experts to contribute, allowing the debate to go beyond partisan arguments.
She said that she would have wanted experts to answer MPs’ questions to ensure that what MEPA ultimately decides on is backed by both sides, before appealing to fellow MPs to show the public that they are capable to agree on such important issues.
Minister insists offshore LNG storage more dangerous 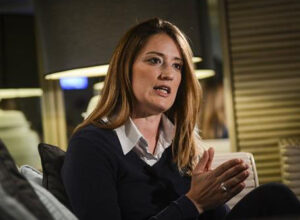 A week earlier in a speech given in the European Parliament Maltese MEP Dr Roberta Metsola spoke about the plight of Marsaxlokk residents where she again urged the Government not to rush with its proposal to berth a huge floating gas storage unit in the middle of Marsaxlokk bay, so close to a heavily populated residential area.
Dr Metsola presented her petition, now supported by more than 3,000 people, emphasising that there has not been any maritime impact assessment carried out on the project and underlining that the risk to residents would be greatly mitigated should the tanker be berthed outside the bay, with proper security zones around it.
Dr Metsola said that the project may run contrary to the provisions of the EU’s SEVESO Directive, and that the impact on people’s lives, the environment, businesses, fishermen and their boats has not been properly taken into consideration by the Government.
“Over the past weeks and days I have met with many concerned citizens of the towns and villages that are most affected by this proposed project and they cannot understand why these unnecessary risks are being taken in this manner. In contrast, other EU Member States with similar projects, such as those off the Italian ports of Livorno and Ancona, have ensured that safety is paramount and that the legitimate concerns of residents were addressed by stationing the depot a safe distance away from them, with proper security zones around the vessel. None of the above safety provisions are envisaged in the Maltese Government’s proposed intentions” said MEP Metsola.
Dr Metsola quoted the EU’s SEVESO II Directive which lays down that Member States shall prohibit the use of any establishment, installation or storage facility, where the measures taken by the operator for the prevention and mitigation of major accidents are seriously deficient saying that petitioners were understandably concerned that the project will violate the Directive.
Marsaxlokk bay already houses a concentration of power generation and fuel storage facilities as well as very busy in-bay shipping movements of the Malta Freeport. Only a preliminary Quantitative Risk Assessment has so far been carried out and no Maritime Risk Assessment has been carried out.
“The risks associated with the implementation of the project of conversion of power facilities to gas would be greatly mitigated if the gas storage for this plant be moved to a secure location and a safe distance from residential areas, outside the bay. As the only Maltese Member of the European Parliament’s Petitions Committee I had a duty and a responsibility to act” added Dr Metsola.
“This project runs totally opposite to what is being done by other EU governments that have taken all the necessary precautions with similar projects. An expert in the field recently said that the consequences of a gas leak would be disastrous for Malta and 91% of residents in the area agree with him. There is simply no need to take unnecessary risks and rush things through,” said Dr Metsola.
Concluding, MEP Metsola reiterated her call for the European Commission to investigate any risk to public safety.
[Main source: www.independent.com.mt]
Post Views: 16
Previous
Official video of Malta's song for Eurovision 2014 goes viral
Next
Fascinating book sheds new light on Malta’s early wartime experience