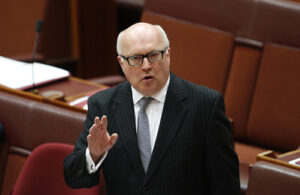 NEWS   After budget backlash and a huge drop in government support, attorney-general Senator George Brandis is reportedly planning to back off on plans to remove sections of the Racial Discrimination Act. According to a report in The Age published yesterday, Mr Brandis has reacted to outrage about his proposal by moving to wind back the proposed changes.
The changes would have scrapped section 18C, which pertains to the definition of racist insults and hate speech.
Specifically, Mr Brandis will reportedly water down a section in the draft legislation related to “hate speech” which exempts “words, sounds, images or writing spoken, broadcast, published or otherwise communicated in … the public discussion of any political, social, cultural, religious, artistic, academic or scientific matter” from prosecution.
Community groups and Coalition MPs in marginal electorates, some representing large ethnic communities, have fiercely protested the changes.
Liberal MPs who supported the initial plan have also agreed that the government needs to rethink the changes, admitting that the laws have fallen to the wayside during the post-budget storm.
“There hasn’t been a word whispered about it,” one MP shared.
The change in approach comes after Aboriginal reconciliation leader Patrick Dodson last night called for politicians to be “brave, bold and courageous” during his Lowitja O’Donoghue Oration in Adelaide.
Mr Dodson reiterated the powerful impact of racism, saying “it drives us out of places and spaces where we have every right to live and learn…It’s not a triviality.”
Senator Brandis said on Tuesday he was working through the 5300 submissions and the government ”didn’t have a consultation period with the intention of not listening to what people have to say”.
”There is a large variety of views from all points of the opinion spectrum and we will take into consideration all of those views and we will arrive at a final proposal,” he said.
NSW Liberal MP Alex Hawke, who has been a supporter of scrapping section 18C, admitted on Tuesday that changes needed to be made to the draft laws. ”We need to start again. I don’t want to see journalists prosecuted for offending but ethnic communities’ leaders are making a compelling case that any reforms have to be very carefully handled,” he said.
Fellow NSW MP Craig Kelly, who has also previously supported repeal of 18C, said he still supported doing something but ”the detail of the legislation, there are perhaps one or two words that could be moved around. I don’t think the first draft that George has done is locked in concrete and I think everyone is flexible about changes to the proposed wording”.
A third MP, who also initially supported the changes, said he had been swamped by ethnic community leaders lobbying against the changes.
However, Liberal senator Cory Bernardi said he still supported the proposals.
”Some principles are worth fighting for. I happen to believe freedom of speech is one of those principles.”
[Sources: www.theage.com.au and http://thenewdaily.com.au]
Post Views: 29
Previous
Nationalist candidate wins sixth MEP seat by just 206 votes
Next
Efficiency review to recommend co-location of SBS operations at ABC headquarters