Time to establish a civil rights movement in Australia 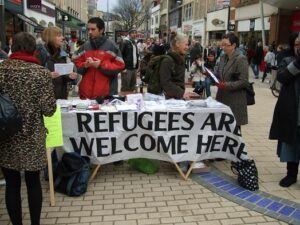 BLOG   By Victor Borg  Over the last few days on our TV screens we have followed the sad plight of thousands of refugees making their way to Europe from Syria, Afghanistan and Iraq. We have seen them crossing in rubber dinghies to Greek islands from Turkey and marching through Hungary in their desperate attempt at reaching Austria and Germany to make a future for themselves and their families. One can’t help but admire their spirit to overcome all odds.
It was pleasing to note the welcome extended to them by the German and Austrian communities. This is in sharp contrast to the treatment meted out by the Australian Government to refugees who happen to venture close to our shores.
Australia has dehumanised refugees to the extent that a large section of the Australian community appears to accept that the cruel and shameful conditions we impose upon them is justified as a means of “stopping the boats”. One can recall the Government’s reaction to the release of the report of Professor Gillian Triggs, President of the Australian Human Rights Commission, who detailed the appalling conditions and suffering of refugee children held in detention. Australia’s policies have been denounced by the rest of the world, most notably in the New York Times in its editorial Australia’s Brutal Treatment of Migrants.
It is scandalous that the Australian Border Force Act, effective from July, imposes severe penalties including imprisonment of professionals and other staff for publicly disclosing any information relating to the conditions imposed on those held in detention. This is further proof of a government demanding secrecy to ensure that the Australian population is kept in the dark.
It seems that the community has been conditioned to become complacent and disinterested to the extent that it fails to observe core values including a fair go for everyone.
One recalls the public protests regarding the cruel treatment of livestock exported from Australia and a government prohibition of live exports pending agreement on slaughtering procedures. There have been little or no protests when it comes to the cruelty imposed on fellow human beings as a direct result of Australian government actions.
The establishment of a civil rights movement to challenge and to hold government to account for the treatment of people who seek refuge in this country is long overdue. It is not acceptable for a community to allow human beings to be detained for long periods of time and, as a result, suffer from serious medical and psychological conditions.
One can only admire the efforts of David Manne and Julian Burnside QC who have displayed a willingness to challenge government legislation and procedures in the interest of the accused and disadvantaged refugees.
I believe that what is really needed in Australia is for the community to get the message across to our government through a well-organised and effective civil rights movement to constantly oversee government policies and, in appropriate cases, challenge them in the courts.
Establishing such a movement would not be difficult. One just has to observe the multitudes who regularly show up at public rallies organised by community groups to protest against unfair government policies. The latest example were the Light the Dark—Australia Says Welcome rallies held on the last day of August in cities across the country to show solidarity with the asylum seekers from war-torn countries who recently lost their life in their desperate search for safety and peace in Europe.
It is only through such movements that politicians can be held accountable.