A Transient Colony in the Valley of the Nile: The History of the Maltese Colony in Egypt throughout the centuries 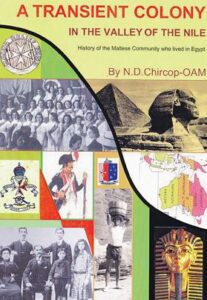 This is, without any doubt, the most comprehensive compendium of information about the Maltese community of Egypt, starting with the involvement of Maltese troops in the invasion of Egypt by Napoleon. It culminates in the maelstrom of 1956, when all British citizens, which included Maltese, were expelled from Egypt.

The book starts with a short description of life in Malta, as well as in Egypt, in the 18th century, when migration to the northern shores of Africa was in full swing.

It then describes the life and vicissitudes of Maltese migrants, as they eventually made a successful settlement on the banks of the Nile. This was not, however, a smooth and uneventful settlement and, on more than one occasion, they were uprooted and had to find shelter elsewhere.

The book chronicles the story of many individuals who contributed to the development of the Egyptian economy over the decades. One is pleasantly surprised to read about the many Maltese who managed to obtain very senior positions in various professions, and whose achievements were duly appreciated by the Egyptian, as well as the British colonial, administrations of the time.

One such outstanding individual was Andrea De Bono, who may be considered one of the most intrepid personalities that have emanated from the shores of Malta and who made it his lifetime ambition to search for the sources of the Nile.

This book illustrates how a settler’s life, while being mostly uneventful, can be shaken by intermittent convulsions that threaten one’s existence.

One such episode occurred in 1882, when Egyptians rioted against foreigners and many Maltese found themselves homeless and penniless. It is indeed a sobering episode.

Many left Egypt and came back to Malta. Their reception in Malta left a lot to be desired, with few people being prepared to help their brethren in their hour of greatest misery.

Chircop quotes from the newspapers of the time, as well as from official correspondence, to highlight the poignancy and the desperation of those compatriots who suddenly found themselves obliged to abandon their homes and their adopted country.

This was a forerunner of events that were to take place some 70 years later when, in 1956, they were again thrown out of Egypt. This time they were not even allowed to land in Malta and had to seek shelter mainly in Australia, Britain and France.

A particularly poignant personal history is that of Oscar Caruana, who related his experience in connection with being extradited in 1957. Two policemen knocked on the door and he was given seven days to leave the country, in the meantime being kept under house arrest.

He and his family were allowed to take with them only 95 Egyptian pounds and jewellery to the same value. All his possessions were to be left for the benefit of the widows of Egyptian soldiers.

By the time they made their way to the ship, all their cash and jewellery had been wheedled out of them by unscrupulous hangers-on, rendering them penniless until reaching Genoa. From then on they lived on charity provided by the British Consul and by the Red Cross.

This work gives us a detailed narrative about life in Egypt. It gives a lively description of what it must have been like to be a migrant at that time. The author gives a first-hand account of life in that country in the first 50 years of the 20th century. For those who have been there and lived through the episodes described in this book, there is no doubt that many memories will be evoked.

It is a compendium summarising the contributions made by hundreds of Maltese people to the country which they made their home for several generations.

Why write another book about migrant life? I believe there are many good reasons why someone with a detailed knowledge of the history of the country, as Chircop has, should ensure that these stories are not lost in the flotsam of history.

In the first place, this story ensures that the experiences of these migrants, who settled in Egypt over a period of a century-and-a-half, are not forgotten. This is of interest not only to those who lived through the episodes described, but also to every person interested in the story of emigration.

Secondly, this book provides considerable insights into relationships between countries during colonial administration. The role of individuals, their personalities, their response to challenges and their role in changing the history of a nation, including their questionable decisions which led to catastrophic rioting and wanton destruction, are all described here in ample detail.

A third good reason for writing this book is to remind the people in Malta about the role that migration plays in the economics of a country. It is also a good reminder of the interplay – not only economic but also political, demographic and even psychological – between those who leave and those who stay at home.

During the early part of migration history, in the middle of the 19th century, every migrant left Malta with the intention of staying for a while and then coming back to Malta. Migration was purely a means of obtaining urgent cash for family dependants during crises.

The Maltese economy went up and down like a yo-yo, often improving during episodes of war and sinking in-between. War-related activity kept the economic wheels well oiled.

But nobody expected the migrant to stay abroad for ever and, if not exactly welcomed back, they were not barred from returning when they wished, or when they were obliged to, as happened several times during periods of crisis, including epidemics, riots and wars.

This laissez-faire attitude, however, became very seriously unhinged in the post-World War II period and, more precisely, during the Suez crisis in the 1950s, when British citizens were obliged to leave Egypt.

To the everlasting shame of the Maltese government, these refugees of Maltese origin were refused settlement in Malta.

At the time, of course, Maltese in Malta or outside it were all British citizens, carrying British passports. Maltese in Egypt always thought of themselves as Maltese and had retained their customs and their culture, if not always their language.

It is, therefore, the more puzzling to understand on what basis they were refused entry into Malta, apart from the obvious explanation that Malta at the time was passing through an economic depression and could ill-afford the 10,000 or so Maltese from Egypt. There was no legal and certainly no moral justification for such an action.

As it happens, these migrants, who were always flexible and ready to face new challenges in their new environment, have now made their homes all around the world, in Australia, the UK, France, the US and other countries.

They have an impressive record as members of the Maltese diaspora, forming part of that amorphous body called Greater Malta, which includes all those Maltese who still consider Malta their home, if not their place of residence.

This book fills an important niche in the history of migration, and the author is to be commended for committing his memoirs to paper. He has taken pains to consult many original documents, including newspapers, newsletters and other documents in several languages, which mark him as a polyglot, a characteristic he shares with many other Maltese from Egypt.

Copies of the book may be obtained by sending an e-mail to [email protected].

[Published on timesofmalta.com on 20 September 2015 and on mauricecauchi.wordpress.com on 13 October 2015]

Views: 215
Next Post
Maltese Achievers in Australia: The Maltese Contribution to Australian Society
Previous Post
Under One Umbrella: A History of the Maltese Community Council of Victoria 1958-2008

Maltese Achievers in Australia: The Maltese Contribution to Australian Society

Under One Umbrella: A History of the Maltese Community Council of Victoria 1958-2008