In a Farewell Reception held on Sunday 18 June at the Maltese Community Centre in Parkville, members of the Melbourne Maltese community joined the MCCV in farewelling the outgoing Consul General of Malta for the State of Victoria, Mr Victor Grech. His term of office concludes at the end of June, after serving for almost four years.
Among those present were the Honorary Consul of Malta for the State of Victoria Dr Edwin Borg Manché; the MCCV President, Mr Victor Borg; the Superior General of the Missionary Society of St Paul Fr Mark Grima mssp; MSSP Provincial, Fr Ivano Burdian mssp; members of the MCCV Executive Committee and presidents of affiliated associations. MC for the event was Mr George Saliba.
MCCV President Mr Victor Borg welcomed those present to the community event to mark the end of the term of office of Mr Victor Grech as Consul General.
Mr Borg briefly spoke about Mr Grech diplomatic career, having served in various posts overseas, including Brussels and London on behalf of the Maltese government before his  posting to Victoria in October 2013. Mr Grech is a senior member of the public service which he joined in 1976.
Mr Borg said that he is always pleased to see a career diplomat posted to the State of Victoria as it raises the status of the Maltese community in Melbourne.
Mr Borg said that Mr Grech impressed our community because he took part in just about every social activity in Victoria. “There is one thing about the Maltese community: if you become Consul General and you can’t dance, you’ll learn how to dance before you go home because we have so many associations and their social activities every year,” he said.
Mr Borg referred to Mr Grech’s persona involvement in the Consul-on-the-move programme by travelling to various locations in Australia and New Zealand to accept Maltese citizenship and passports from Maltese citizens living in or near places where there is no Maltese diplomatic or consular presence with the required biometric equipment. This saved these
people from incurring significant travel and accommodation costs that they would otherwise have incurred to obtain these
services.
Mr Grech travelled to Western Australia, Queensland, South Australia, Tasmania, Northern Territory and New Zealand to deliver these consular services under this programme.
Mr Borg wished Mr Grech well on his next appointment. “You certainly showed a lot of effort and wisdom and we always welcomed your counsel from time to time. As a community, we’ve had a very close relationship with you and we regard you as one of our own,” he said.
Mr Borg said that, on his recent visit to Malta, he caught up with former Consuls General in served in Melbourne, Angele
Azzopardi and Charles Mifsud, both of whom spoke very highly of Australia. He said that he is “sure that the same thing will happen with Mr Grech, who will in future recall his time in Australia as one of great experience, meeting another large section of the Maltese community, knowing that we still hold Malta in our hearts and we still believe we are part of the larger global Maltese communities.”
Finally, Mr Borg thanked Mr Grech for all his efforts and wished him and his family well in the future.
Next to speak was MSSP Provincial Fr Ivano Burdian, who, on behalf of his MSSP brothers, thanked Mr Grech for the very good relationship that was established and the service that he provided to the Maltese community during his tenure of office. Mr Grech was always ready to help when needed. He invited to visit the MSSP in St Agatha’s at Rabat and to maintain an ongoing relationship.
In his reply address, Mr Grech said that for every beginning of a posting commitment there is an end. He thanked the MCCV for holding a farewell reception for him. He said it was unusual to get such a farewell at the end of a posting and the only one he could recall was in Strasbourg. 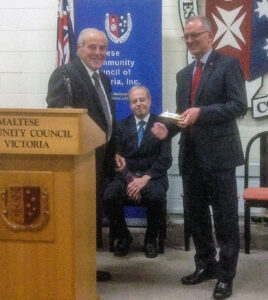 Mr Grech said that during the term of office it is assisting and guiding people who experience problems that motivates him in carrying out the duties of Consul General. He was looking forward with confidence that he would be able to serve well when appointed to the role.
Mr Grech said that the work of the Consul General is broadly divided into two areas: first, assisting in, and protecting, Maltese national interests and Maltese-Australians, and second, the promotion of trade, investment, tourism, and cultural exchanges between Malta and the host state, in this case, the State of Victoria.
The first, assisting in, and protecting, Maltese national interests and Maltese-Australians, consists of an ongoing service. He continued on the work of his predecessors to whom he wanted to pay his respects and thank them for the work they had done in this area.
Mr Grech said that he and his staff always go the extra mile to serve the community. During his term of office his office received and processed about 3,500 passport applications, and over 400 Maltese citizenship applications.
Mr Grech then spoke about his role in Consul-on-the-move, a programme which was launched in May 2016 and he was
committed to make successful. During his visits to the various locations he delivered about 300 consular services. The programme was well coordinated by the Malta High Commission in Canberra.
To promote trade and investments, as part of the Consular Corps, Mr Grech attended various events organised by the Department of Foreign Affairs and Trade in Victoria. These included visits to Gippsland region, Phillip Island, Mildura, Ballarat, Bendigo, Geelong and the Peter MacCallum Cancer Research Centre in Melbourne.
During his term of office Mr Grech was involved in visits to Melbourne by Opposition Leader, Dr Simon Busuttil, in November 2013 and by the President of Malta, Her Excellency Marie-Louise Coleiro Preca in July 2016.
Mr Grech also assisted the Honourable Bruce Atkinson, the President of the Legislative Council of Victoria, for a 3-day visit to Malta, which was very successful.
Mr Grech recalled his office’s support in conjunction with the youth organisation  Generation Australian Maltese (GAM) in promoting and showing the popular Maltese feature film, Simshar, in Melbourne. He also referred to other cultural exchanges that he promoted during his term.
Mr Grech thanked all those involved in the teaching of the Maltese language. He praised the work of the Maltese Language Teachers Association of Victoria (MLTAV) under the leadership of Mark Bonello and the work of the MCCV led by Edwidge Borg to encourage the learning of our language. He thanked Malta’s Education Minister Evarist Bartolo who approved a grant of about 10,000 Euros in 2015 to the MLTAV.
Mr Grech thanked MCCV President Victor Borg for his dedication and energy and his predecessor Prof. Maurice Cauchi, for their support. He thanked the media and the religious orders for their invaluable services to the community. Mr Borg then presented Mr Grech with a small gift as a farewell memento.