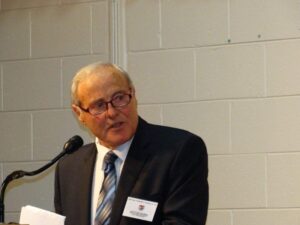 In the absence of MCCV President Professor Maurice Cauchi, who was in Malta to attend the meeting of the Council for Maltese Living Abroad, Vice President Victor Borg welcomed the distinguished guests and spoke on the importance and meaning of the Independence celebrations to the islands of Malta and Gozo. He gave some background on the history of Malta putting into perspective the importance of Malta’s achievement of independence 50 years ago.

In his address, Consul General of Malta in Victoria Mr Victor Grech said that, while the Maltese bravery during World War II was acknowledged through the award of the George Cross, the Maltese wanted a secure future either within or without the British Empire. The calls for independence became stronger. Following the closure of the Suez canal in 1957, the British government announced that it would downsize their military presence around the globe, including Malta.
Mr Grech said that the granting of independence to Malta on 21 September 1964 marked the ending of thousands of years of foreign rule. “Therefore today it’s the 50th anniversary of this magnificent event and I would like to express my feelings of respect and gratitude to the politicians and previous Maltese governments who over the years devoted their energy to make Malta an independent nation.” Though a small island nation, Malta has contributed beyond limits of imagination to peace and prosperity no only within its borders but beyond to outer countries of the world, he said 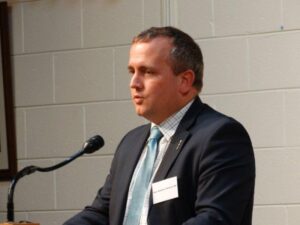 Representing the State Premier of Victoria as well as the Minister for Multicultural Affairs and Citizenship, the Hon Andrew Elsbury said that celebrating the 50th anniversary of Malta’s independence is a joyous occasion for all Maltese around the world.
Mr Elsbury said that it is an opportunity to reflect on Malta’s proud history and the relationship between our two great nations. He pointed out that they are two great nations of islands, “ours is a little bit bigger but in any case still an island”.
Having been to Malta last year as part of a Victorian parliamentary delegation, Mr Elsbury said that he spoke with government officials about the challenges they are facing and these are not dissimilar from those being faced by government in Australia like health care and transport.
Malta has come a long way since achieving its independence 50 years ago. In their struggle to independence the Maltese people paved the way to a democratic republic and peaceful nation that Malta is today, he said.
Renowned around the world for its breathtaking coastline and its iconic architecture, Malta has much to teach us in the value of preserving its history and traditions, said Mr Elsbury.
He said that the Maltese are one of the longer lasting communities in Victoria because they paved the way for the many multicultural communities that followed them. The Maltese community in Victoria is one of the largest in the country. We are also grateful to the older generation for sharing their stories, customs and wisdom with us, to be able to continue their culture and give identity to future generations of Maltese who call Victoria their home. 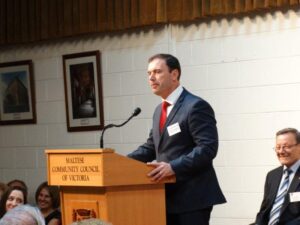 Representing the State Leader of the Opposition, the Hon Colin Brooks said that the Maltese have made a significant contribution to Australia and to Victoria. The Maltese were ground-breakers in developing the multicultural spirit in Victoria, where every second person was either born overseas or has a parent who was born overseas. He commended the Maltese community for the way in which it has helped to not just provide the rich tapestry of diversity and cultural difference but also to bring that together as one strong society.
Mr Brooks said that he also wanted to acknowledge the contribution in its efforts during the Second World War. It would be remiss not to mention the suffering of the Maltese people and their courage. They played no small part in ensuring victory in that conflict and securing the freedom that we all enjoy today. He wished everyone a Happy Independence Day and congratulated the MCCV and all the community organisations for providing such an importance service to the fantastic Maltese community. 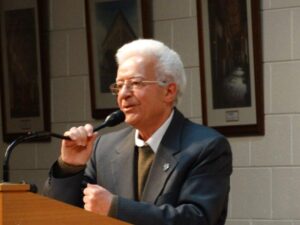 Addressing the gathering, Fr Edwin Agius said that Maltese history is connected with religion. Malta celebrates three national days connected with faith: 10 February St Paul’s Shipwreck in Malta, 15 August Feast of the Assumption (associated with the Convoy of Santa Maria) and 8 September the Feast of Maria Bambina (associated with the victory in the Great Siege of 1565).
Fr Agius referred to the three aeroplanes during the war that were named Faith, Hope and Charity. From a religious point of view independence comes from a Jewish concept in the Old Testament. The Jews say that Judaism is not a religion but a nation. To be a nation means to have God who rules over it. During the past 50 years since independence, Malta has grown as a nation because God provides.

The large audience at the Maltese Celtre