Postal address: PO Box 174, Altona North, Victoria 3025
Website: N/A
Date Club founded: 1976
Association Objectives. The main purpose for which the Association was formed is keep the festa tradition of the village of Tarxien, Malta.
Association History
The Tarxien Social Club was formed in 1976, when Joe Farrugia migrated to Australia and together a few members of his family and friends from Tarxien, Malta, they decided to start getting together to celebrate the feast day that they dearly loved and missed once a year. For the first time that year they organized the feast of Our Lady of the Annunciation in Queenscliff.
A large framed picture of the Annunciation was used in the feast celebrations, as a mass for the occasion was held and some poems that been sent for the occasion from Tarxien were played on tape. Since this first celebration, the feast of the Annunciation kept growing every year.
After 3 years in 1979 the statue of the Annunciation was commissioned and produced. This original statue was recently replaced with a new one created in Malta by Renzo Gauci and painted and gilded by John Orlando.
In 1980 the Tarxien Social Club organised its first ‘Xalata ta’ San Girgor’ (St Gregory’s Picnic) at Portarlington on the Australia Day weekend in January. 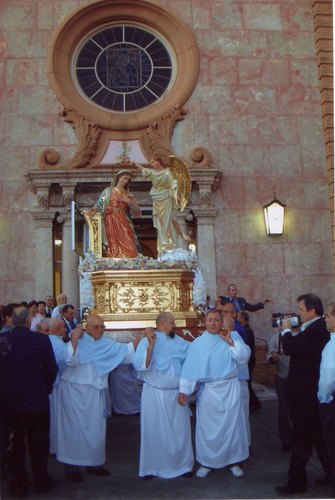 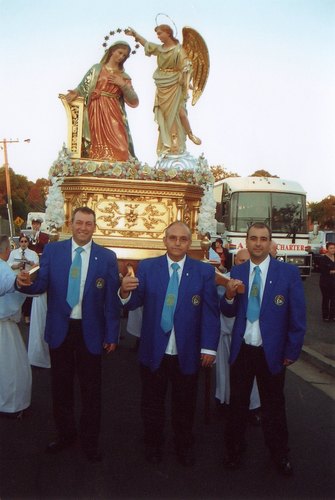 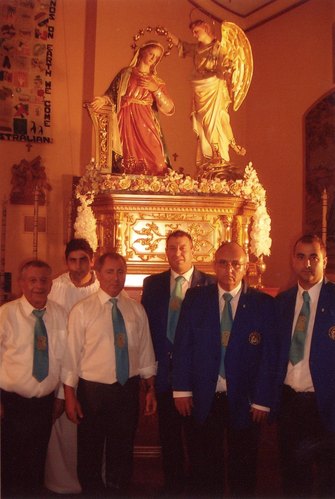 The Tarxien Social Club celebrates the feast of the Annunciation in the second or third week of April. Some visitors from Malta also come and celebrate the feast with us every year, with a healing mass celebrated on the Friday, followed afterwards by refreshments and old Maltese tradition comedy play in the reception hall. On Saturday a big dinner dance is held with a lot of entertainment including a Maltese traditional band concert in the final hour. On Sunday the feast mass is held at 3.00 pm, followed by a procession with the statue of the Annunciation After the church festivities, a reception is held with refreshments and more Maltese traditional band concert with other musical entertainment to close proceedings.