On a bright Spring morning on Saturday 25 May 2013 Malta’s Foreign Minister, Dr George Vella, and the chairman of the ANZAC Memorial Committee Malta, Mr Nicholas Bonello OAM, inaugurated the ANZAC Memorial at the Argotti Botanical Gardens in Floriana, Malta before a gathering of over 200 guests. The monument designed and built by sculptor Gianni Bonnici commemorates the thousands of Australian and New Zealander servicemen and women killed during the wars.

The Msida Sea Scouts band opened the ceremony with a march starting at the garden gates and ending beyond the Memorial, after which Master of Ceremonies, Mr Charles Coleiro, called on the Hon Dr George Vella, Malta’s Minister for Foreign Affairs, and on Mr Nicholas Bonello OAM, Chairman ANZAC Memorial Committee-Malta to deliver their inauguration speeches.
Before delivering his speech, Dr George Vella read a message from the Hon Dr Joseph Muscat, Prime Minister of Malta, who due to pressing commitments was unable to attend. Dr George Vella and Mr Nicholas Bonello then read their inauguration speeches.
These were followed by the blessing of the memorial by Monsignor Philip Calleja OAM who also recited a prayer for the wars victims and their families. The Msida Sea scouts rendered a Short music program.
Next on the program was the reading of messages by Her Excellency Ms Jane Lambert, High Commissioner of Australia in Malta, and Ms Jill Camilleri, Hon Consul for New Zealand. Ms Jane Lambert also read a message of congratulations from the Hon Bob Carr, Australia’s Minister for Foreign Affairs. Mrs Mary Bonello and Miss Claire Bonello then read the messages received for the occasion.
The national anthems of the three countries were sung in this order: the National Anthem of Australia, sung by the full choir, followed by the National Anthem of New Zealand was sung in Maori and in English by two solo girls, and finally the Maltese Innu Malti was sung by the full choir.
In closing the ceremony, MC, Mr Charles Coleiro thanked those present. The Msida Sea Scouts closed the ceremony by marching back to the Argotti Garden gates. 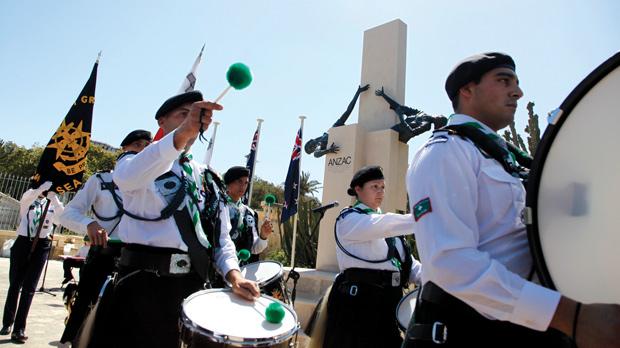